Don't want to install? Here is the Zip File.

Note: This is an early test version.

This program is designed to be network manager if you find yourself using different methods of getting your IP address.

At some locations, I use DHCP for my IP, at some other locations I use Static IP. There are even times where I need to load up a server application on my computer and switch to a different Static IP.

This gives you an interface to switch from DHCP to any selected Static IP profile and back again!

This requires the .NET 2.0 Framework!

This needs to be ran as the ADMINISTRATOR!

Look at the included sample files to see how to set them up for your
network.

Please refer to the ReadMe if using the Zip file and need to know where to put the "xns_*.txt" profiles! 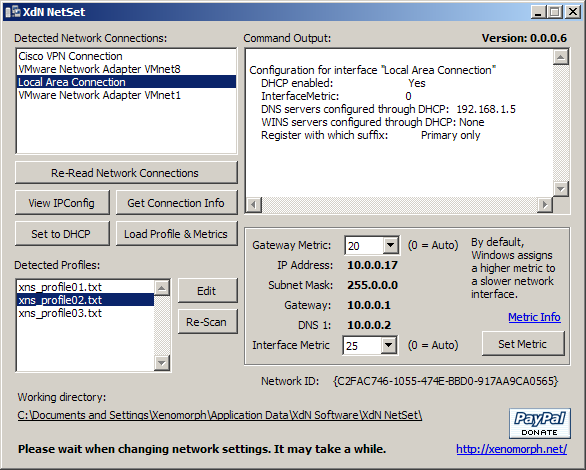 - much of the program re-written. not better, just different. :)
- now uses WMI to get some of the network information.
- removed button to set interface metric. i can only seem to get
Windows to use the network based on Gateway Metric, and it seems
like i can only set that when the device is set to static.
- now shows Network Device when you click on the Network name.
- when you run it, it no longer is shown on the Taskbar.
- you can now double click the Tray icon to open the window.
- if you attempt to run a second instance when it is already running,
it will bring the program window to top.
- increased metrics list amount again. Vista seems to default to some
big numbers in the hundreds.

- better detection of Networks: it should only list active
networks that have present devices. on my work system, it use
to show 12 networks or so because i've had so many devices
plugged into the system and removed over time.