There are now multiple programs that try and correct this issue under Windows Vista and Windows 7! 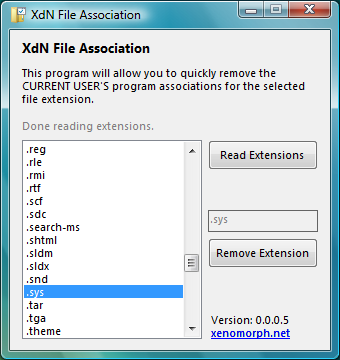 This is a new tool for Windows Vista from me to try and correct another issue with the OS... This one removes (incorrect) file extension associations.

Unlike previous versions of Windows ... If you accidentally associate the wrong program to a certain file extension under Windows Vista, it does NOT let you remove that association (without opening up the Registry Editor, going to a certain key, deleting it, etc).

Vista will let you change the association from one program to something else, but not let you remove a program from the list.

For example, lets say you accidentally associate a SYS file with Notepad. Vista won't let you remove Notepad from the list of programs that opens a SYS file. You can change it to another program, but to what? Why can't you just remove all the associations from SYS?

This lets you easily remove the "customized" extensions for the current user.

With the customized file extension removed from the current user's registry, the system default action for that extension returns.

I have added this to my XdN Tweaker as well, but I will also keep it as a stand-alone.

Under XP, 2K3, and Vista, when trying to view a file type with no program associated with it, you get this dialog:

You may choose a program such as Notepad to view the file. But what if you accidentally leave the box checked for "Always use the selected program to open this kind of file"? 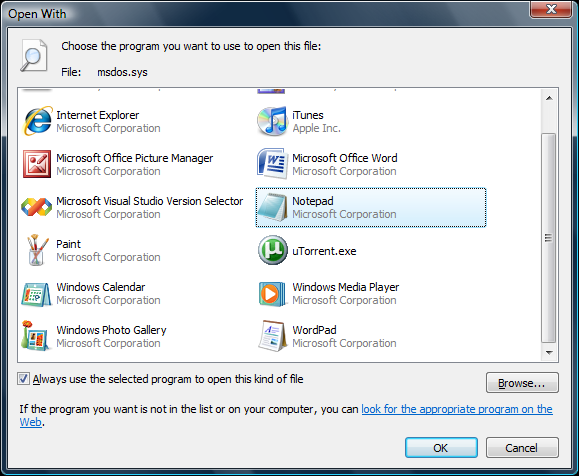 Under Windows Vista, when you try to change a file extension's program association, you are given a choice to only select a different program, and NOT remove any of the programs listed.

If you know that NO program should be associated with a certain file extension, then why won't it let you remove the program? Previous versions of Windows would let you do this. Windows Vista will not. 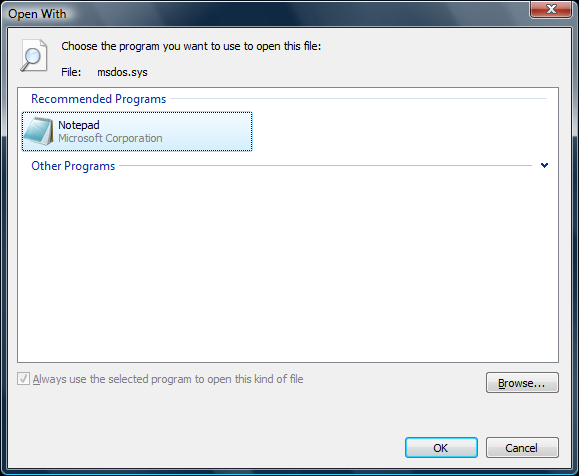 That is where XdN File Association comes in.

It scans the current user's file extensions, and lets you clear the settings for the one you select.